Left untreated, meningococcal disease, a bacterial infection, can have devastating effects on the surrounding population. This is why there are well developed standards in place in the event an outbreak does occur. These standards are clearly outlined in the 20 page CDC manual called, Guidance for the Evaluation and Public Health Management of Suspected Outbreaks of Meningococcal Disease.

In 2015, the University of Oregon (UO) was the center of a meningococcal disease outbreak that cost one 18 year old student her life. Had the local hospital followed the standard of care outlined in the CDC manual and practiced by other emergency room physicians, it is very likely she would have survived.

Lauren Jones, a student athlete originally from Georgia, was attending her first year at UO. Half way into the year Jones went to PeaceHealth Hospital suffering from “flu-like” symptoms. She was given Tylenol, told to drink water, and sent home. Later that day, she was found unconscious in her dorm room and rushed back to the hospital where she was pronounced dead due to complications arising from meningococcal disease.

The CDC guidelines and local standards of care are clear about the standard of care when treating an outbreak of meningococcal disease, as it is highly contagious and spreads swiftly. The guidelines state that outbreak control measures are to be implemented immediately, even if there is only one known case. At UO, there had been three patients diagnosed with the disease in the weeks prior to Jones going to the emergency room.

Lauren Jones is survived by her parents, Dorian Sanders and Fred Jones, and her step-father Pedi Sanders.

Medical Malpractice occurred when the physicians treating Jones did not meet the standard of care by failing to conduct a complete blood count (CBC), which would have indicated an increase in white blood cells, and therefore strong evidence of infection, and by failing to obtain a blood culture to check for bacteria in Lauren’s blood.  Appropriate care would have then been to administer an antibiotic treatment as quickly as possible, even if the test results were not yet returned. These basic steps were not taken in Lauren’s case. After her death, Jones’ family filed a lawsuit stating that the doctors at the PeaceHealth hospital should have tested Jones for meningococcal disease as she had been on campus where known cases of the disease were present, and not just assumed she had the flu.

The parents of Lauren Jones claimed that because of the hospital’s negligence, they were deprived of their daughter’s love, society, and companionship, resulting in non-economic damages in the sum of $1 million per parent. Additionally, Lauren Jones’ estate suffered economic damages due to her loss of lifetime income in the sum of $2.5 million. After a two week trial, the jury ultimately ruled that the family of Lauren Camille Jones receive $1.5 million total for the wrongful death of their daughter, which encompassed both the economic and non economic damage claims. 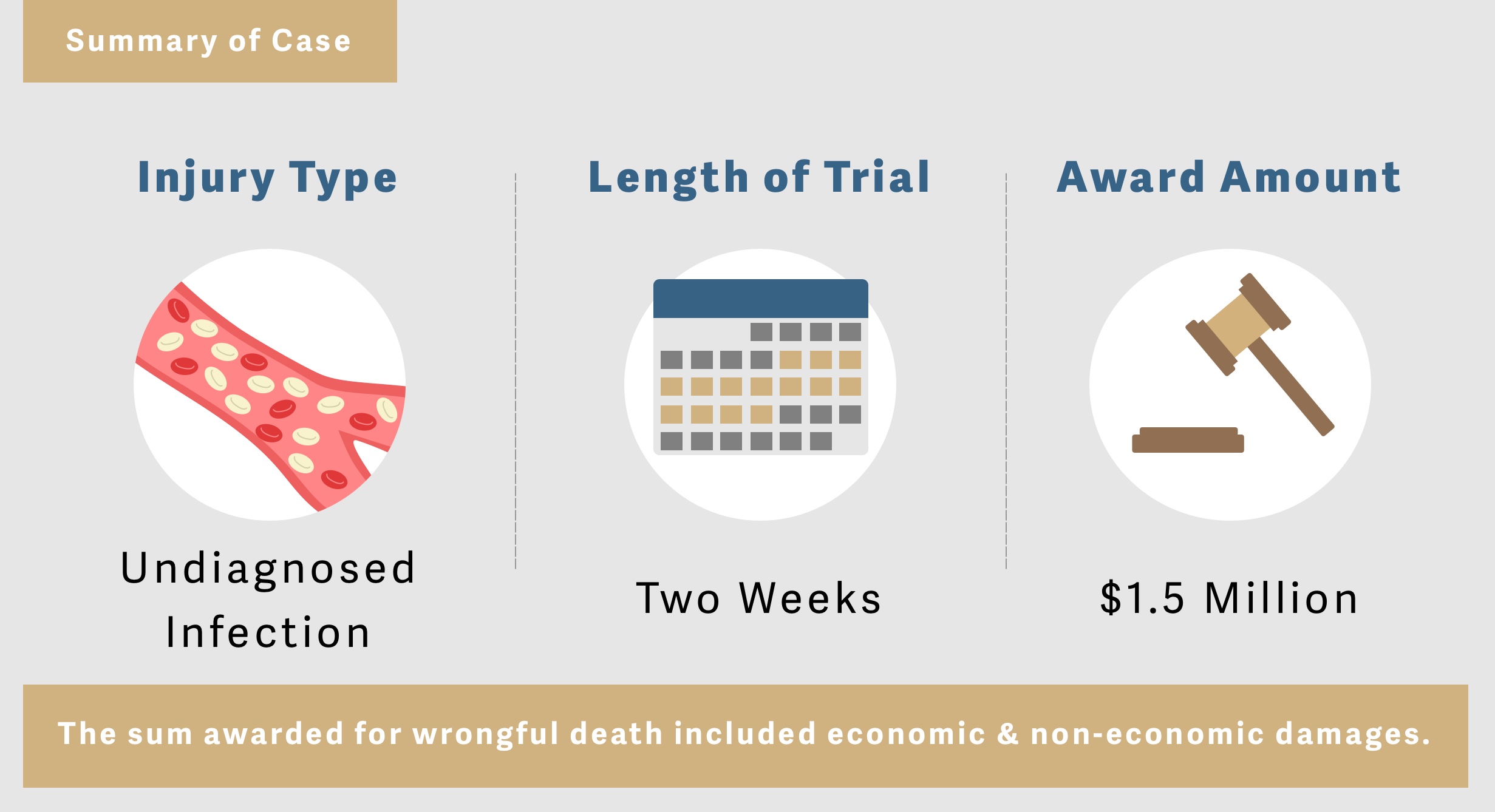 Non-Economic damages are separate from a person’s financial earnings. Much more is lost than a person’s quantifiable economic value when they pass away, a grieving family is deprived of future enjoyment with their loved one. In the case of Lauren Jones, the non-economic damages were awarded to her surviving parents.

Economic damages are calculated by considering the earning potential of a person’s career over a lifetime. These damages can also include the cost of medical treatment and legal fees.

Wrongful death refers to the death of an individual caused by the reckless or negligent care of a physician or healthcare facility. It is the immediate family members of the deceased victim who are left to seek a wrongful death claim to obtain compensation for their emotional and financial damages. Proving a wrongful death lawsuit requires producing strong convincing evidence and expert witness testimony presented by a skilled attorney directly specializing in wrongful death cases.

The doctors and healthcare professionals who treated Lauren Jones clearly violated the standards of care outlined by the CDC and community standards in the face of a known meningococcal disease outbreak, which resulted in the untimely and unnecessary death of a young person. The University of Oregon took this incident seriously and acted upon it.

The university began an aggressive meningococcal disease vaccination campaign on campus after Jones’ death. The CDC recommended that all of the university’s more than 20,000 undergraduate students receive vaccinations.

PeaceHealth hospital did not appeal the case.

Let Us Evaluate Your Case

If you feel that you or a loved one was injured or died due to failure to diagnose an infection, contact the expert attorneys at Miller and Wagner for a free consultation. From our offices in Portland, we represent patients in medical negligence claims against physicians and health care providers throughout Oregon and Washington.