Water Birth Water birth is the process of giving birth while immersed in water. In some water births, mothers will labor while submerged in water, but deliver their baby out of the water. Others opt to remain in water for both labor and delivery. Water births are becoming more and more common for women in the United States.

Despite safety warnings from the American College of Obstetricians and Gynecologists (ACOG), many hospitals offer this delivery method to expectant parents, but most water births are managed by midwives.

Some midwives, birthing centers, and OB/GYNs offer water births as an option intended to reduce physical stresses associated with labor and delivery. The ACOG has stated that water immersion “may be associated with shorter labor and decreased use of spinal and epidural analgesia” during the first stage of labor. However, the college recommends that due to insufficient data regarding the benefits and risks of water immersion during the second part of labor, “birth [should] occur on land, not in water.” Substandard care during water births can cause preventable injuries or other damages to both mothers and infants. Unfortunately, many are not provided with adequate information about the dangers involved and may not be properly evaluated for their personal level of risk. If you or your baby incurred severe or permanent damages from negligent medical care during a water birth, you may have a lawful medical malpractice claim.

While many women have successful water births without complications, it’s crucial to be aware of the risks associated with this birth plan. Even under the best medical care, mothers and babies are still at risk for certain damages or fatalities that may occur during a water birth including pneumonia, water aspiration, infection, umbilical cord tears, drowning, and anoxic brain death.

Hypoxic Brain Damage (also known as Hypoxic-Ischemic Encephalopathy) is a serious risk associated with water birth in which an infant’s brain does not receive enough oxygen. Delivering a baby while immersed in water can prevent adequate oxygen from reaching the brain which can lead to infant fatality or brain damage.

Due to the nature of water births, which involve laboring and pushing underwater, fecal matter or other contaminants may get into the water putting both mothers and babies at risk for infection. During a water birth, an infant may swallow contaminated water which could lead to a serious infection, such as pneumonia.

During a water birth, the umbilical cord could tear underwater. Underwater umbilical cord tears may be difficult for a medical team to assess which could lead to excessive fetal bleeding.

Water aspiration is a complication associated with water birth that is sometimes accompanied by hypothermia. While some studies claim that due to a “diving reflex,” infants do not breathe in or swallow when delivered underwater, this reflex may be overridden if other factors trigger inhalation. 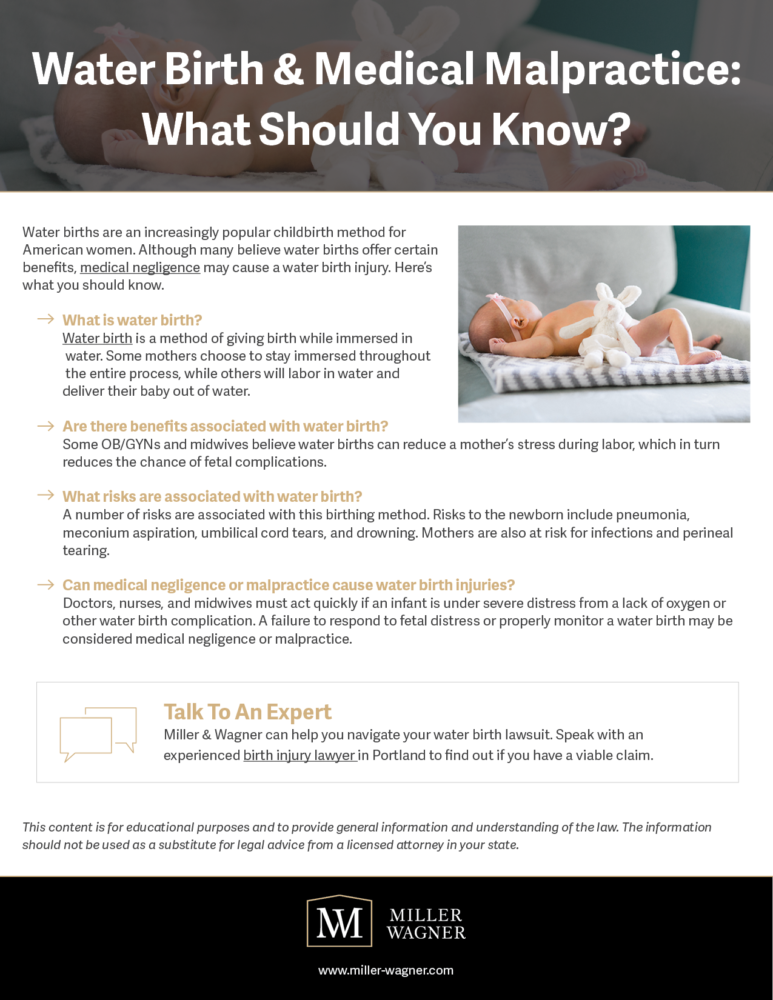 Midwives, birthing centers, and hospitals are responsible for closely monitoring both mothers and infants during water births and preventing complications.

Obstetricians are usually only called into a hospital birthing center after an infant exhibits severe fetal distress caused by oxygen deprivation. Tragically, a doctor’s intervention can come too late when permanent brain damage has already occurred. For example, in 2016, Oregon parents were awarded $13 million in damages due to a botched water birth at Legacy Emanuel Medical Center in which their son was deprived of oxygen for 15 minutes. Due to the mother’s submersion in water during labor, the midwives did not continuously monitor the fetal heart rate. As a result, appropriate doctor intervention did not occur and prompt action was not taken to alleviate fetal distress.

How a Portland Birth Injury Lawyer Can Help

Our Portland medical malpractice law firm specializes in birth injury claims in both Oregon and Southwest Washington. The attorneys at Miller & Wagner represent medical negligence clients throughout the Pacific Northwest including Portland, Vancouver, Salem, and Bend. We also have a satellite office in Pacific City. If your baby suffered from an injury or other damages as a result of birth-related medical malpractice in Portland or the surrounding areas, an experienced lawyer from our firm can help you navigate your claim. Contact us today for a free consultation.