On Thursday, September 19, 2013, and after nearly two weeks of trial before a jury in Portland, Multnomah County, Oregon, Dave Miller and Bob Wagner received a unanimous jury verdict awarding their four-year-old client over $12,000,000.00. In 2016 the verdict was overturned by the Oregon Supreme Court that cited the Oregon Tort Claims Act. This collection of statutes limits the amount of damages an injured patient can recover from Oregon public bodies, such as OHSU. The payment was reduced to $3,000,000. Below is a summary of this tragic case.

This pediatric surgical medical malpractice case was one of the first to result in a Supreme Court test of the constitutionality of a 2009 Oregon law which limits the liability of Oregon’s largest hospital, and only medical school, Oregon Health and Sciences University (OHSU), to $1,500,000.00.

The statutory limitation, or “cap on damages,” has been on the books for years but has come under attack recently as being out of touch with the modern realities of OHSU’s for-profit business operations. OHSU used the lawsuit as an opportunity to make young Tyson Horton the poster boy in its fight to keep its liability for costly medical errors limited by an arbitrary and out-dated statute.

Nearly four years to the day from the date of the 2013 verdict, Tyson Horton was operated on by surgeons at OHSU for removal of a malignant, but highly curable, tumor on part of his liver. The surgeons told Tyson’s family successful removal of the tumor would cure Tyson of his cancer and his liver would regenerate naturally and without any damage.

During the removal surgery, however, the surgeons mistakenly cut through vessels they did not intend to cut, thus destroying Tyson’s entire liver. When emergency attempts to repair the damage failed, Tyson, now gravely ill, was life-flighted to Stanford University hospitals for help.

The surgeons at Stanford told Tyson’s family that Tyson’s only hope of survival was an emergent liver transplant. There was no time to wait for a cadaver donor. Tyson’s only hope was to receive a portion of his mother’s liver. So, on September 21, 2009, both Tyson and Lori Horton underwent life-threatening surgical procedures to accomplish the donation and transplant and to save Tyson’s life.

Three months later, on Christmas 2009, Tyson and his family returned to their home in Klamath Falls. Tyson and his family then spent the last four years riding the dangerous roller-coaster ride of a pediatric liver transplant patient. Multiple hospitalizations, trips to and from Stanford, life-threatening anti-rejection medications, constant monitoring, fear of complications and, of course, mounting medical bills, have been a constant in the Horton’s lives ever since. 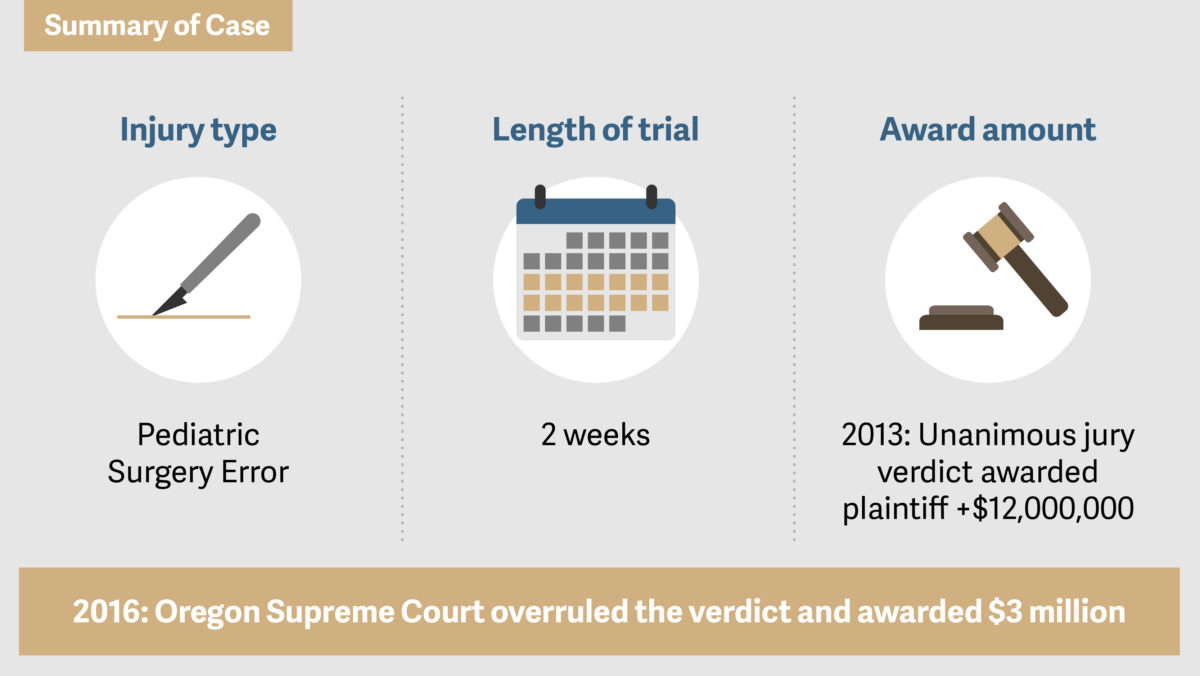 OHSU finally admitted liability for the error in formal documents filed in court ten days before the beginning of the 2013 trial. But OHSU steadfastly refused to fully pay the Horton’s past medical bills, let alone Tyson’s future expenses or damages for all the injuries and suffering they have caused him, which he will experience for the rest of his life. By the time the trial began in 2013, the medical expenses alone for Tyson exceeded $4,000,000.00.

The jury unanimously told OHSU to pay all of Tyson’s past medical expenses, provide funds for his treatment in the future, and compensate him for all he has and will go through. Sadly, OHSU appealed the jury’s verdict.

On Thursday, May 5, 2016, some six and one-half years after Tyson was injured, the Oregon Supreme Court delivered another devastating injury to Tyson and the Horton family: the Court found that OHSU, despite admitting its surgeon’s negligence caused Tyson’s many injuries, did not have to pay the judgment rendered by the jury.

This decision came as a shock to Oregon lawyers watching the case closely, but more of a shock to Tyson’s family, who still faced over $2,000,000 in debt owed to Stanford University and its Children’s Hospital, not to mention a lifetime of costs and uncertainty over Tyson’s future.

The Oregon Supreme Court ruled that the Oregon Tort Claims Act, a collection of statutes governing claims asserted against Oregon public bodies-limits the amount of damages an injured patient can recover against OHSU to a maximum of $3,000,000.

The Court threw out prior cases of its own to reach the conclusion that the statutory cap did not violate the Oregon Constitution. In a stinging dissenting opinion, Justice Martha Walters wrote:

“Today, the majority not only deprives the Horton family of the right to the restorative remedy that the jury awarded, it also bargains away and belittles two constitutional provisions designed to guarantee justice for all.”

She further stated, “This court’s duty is to ensure that the legislature’s laudable intent to benefit the many does not trump and trample the rights of the one. We do not fulfill that duty in this case.” Finally, Justice Walters correctly writes “[Our Constitution] provide[s] a constitutional structure that is designed to provide justice for all and a means to preserve justice for all. Today, the majority does real damage to that structure and to the real people it is intended to protect.”

The takeaway from the Supreme Court’s decision in Horton v. OHSU is two-fold: first, that for the time being, large claims against OHSU run the risk of being found limited by the legislature despite what a jury may decide; and, second, that the people of Oregon need to speak and speak loudly when legislation is proposed to pull OHSU out of the protection of the Oregon Tort Claims Act.

This corporation has long since outlived its history as a public agency. It acts as a large, privately functioning business by investing millions of dollars in its own operation and more millions in the operation of other businesses, including a private health insurer, Moda. The time has come for the legislature, or OHSU itself, to put the lives and interests of its patients above the interests of its insurers.

Miller and Wagner will continue to fight for clients who are injured by the negligent acts of medical providers, be they at OHSU or elsewhere.