What Is the Medical Malpractice Statute of Limitations?

No one anticipates leaving a hospital or other health care facility in worse condition than when they had arrived. Unfortunately, this is a reality for thousands of people each year in the United States. At Miller & Wagner, we help victims of medical malpractice obtain the compensation they need to replace lost wages, cover additional medical care expenses and for any other costs associated with medical negligence.

State laws limit the amount of time an injured patient has to file a claim for medical malpractice. These time limits are known as “statutes of limitations”, and they vary by state. They are also very complicated and fact-dependent. It is important to speak to an experienced attorney as soon as possible to discuss these limits and determine how long you have to file a claim. If you wait too long, you risk losing your right to initiate any action against your medical provider.

Statute of Limitations in Oregon

In general, if malpractice resulted in death, suit must be filed within 3 years.

If malpractice resulted in death, Tort Claim Notice must be given within 1 year.

Regardless, that statute of limitations for both injury and death claims against OHSU, as well as other public hospitals and clinics in Oregon, is 2 years. The so-called “discovery rule” mentioned above applies.

Statute of Limitations in Washington

The statute of limitations in Washington is not quite as complex as Oregon’s, but it is still case-specific.

In general, an injured patient must file suit either (a) within 3 years of the date malpractice occurred, or (b) within 1 year after discovering the malpractice, whichever is later.

At Miller & Wagner, we have helped numerous victims of medical negligence file claims quickly to ensure they do not lose their chance to receive significant compensation. 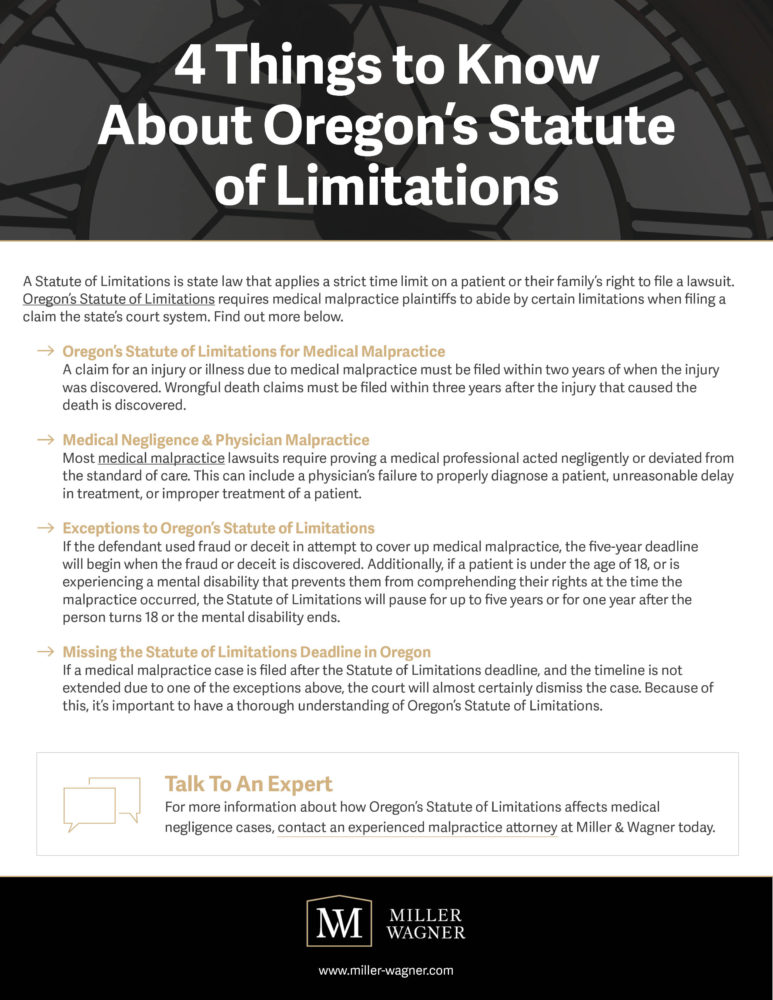